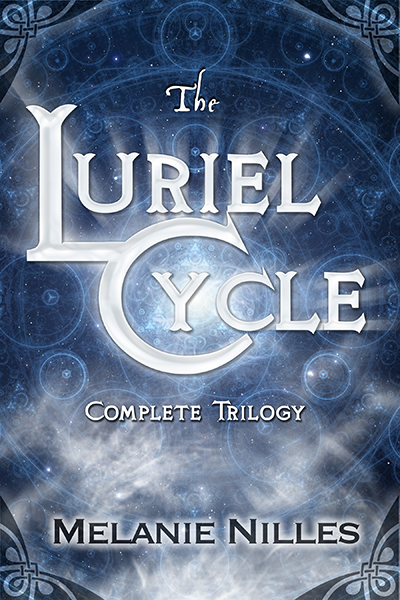 The world of Ahlias has a history of warfare between supernatural beings—daemons and luriel—which have nearly destroyed it at times. But ever since the Scientific Reformation, humans abandoned their beliefs in religious traditions, except for those who continue in secret to avoid persecution by daemon-controlled authorities. The luriel search for the power to end the war, while daemons hunt them down. Legends state that for either side to win, both must be destroyed. For millennia, the humans of Ahlias have been caught in the middle, and now, the mythical power has awakened in one of them. Daemons are relentless, but they have their weaknesses…

Lilly has been marked for death by daemons from a hidden world, a place known as the Shadow Realm. Within her has awakened the spirit of their enemy, one of the luriel. Such beings are myths to her, but one man is out to prove that they exist. The daemon slayer, Mychel, will introduce her to a world of shadows and light hiding beyond the comfort of science and technology, where ancient myths are real and an eternal war rages on, a war in which she has now been conscripted to fight.

One daemon is doing his best to destroy her before that happens. In human form, Darrac is able to get close to her and soon realizes that she is different—through Lilly, an ancient power has revived, a terrible power than can end the war…by eliminating both luriel and daemons. But destroying that power would mean sacrificing the one who has changed his heart.

Time is running out as the luriel within Lilly matures and her powers grow. One choice will determine the fate of two realms.

For the first time, the daemons of the Shadow Realm are afraid. Lilly has destroyed many of them for the sake of forbidden love.

However, the same power to kill daemons has also left Darrac teetering on the brink of death. Heartbroken, Lilly has sworn to do anything to save him, even cross to the Shadow Realm, but first, she must learn to control her power. That won't be easy—she doesn't understand it. No one does. But she is determined to learn, even if that means cooperating with the one man who would gladly see Darrac dead.

Mychel has no love for daemons, not even those who might have changed, but he is dedicated to protecting Lilly. As part of his efforts to hide her from the daemons, he steals her away to an ancient monastery halfway around the world. There, they will uncover secrets that could alter the fates of both realms, but the daemons have other plans.

For millennia, the world of Ahlias was guided by the whims of the Shadow Realm's beings. Daemons unleashed their fury hunting down the enemy luriel hiding inside humans. Those Awakened humans struggled to survive until they could one day Ascend to join the ranks of the luriel fighting the daemons in the Shadow Realm. The cycle of Awakening, Enlightenment, and Ascension was all they knew.

Lilly has the power to end the luriel cycle, defeat the daemons, and restore the balance of the Eternals. She has learned to use the Un'dei within her. She has seen the truth about the luriel and daemons. And she has accepted her fate. The time has come to end the war that has shaped her world and stolen the man she loves.

But the Shadow Realm is no place for a mortal…