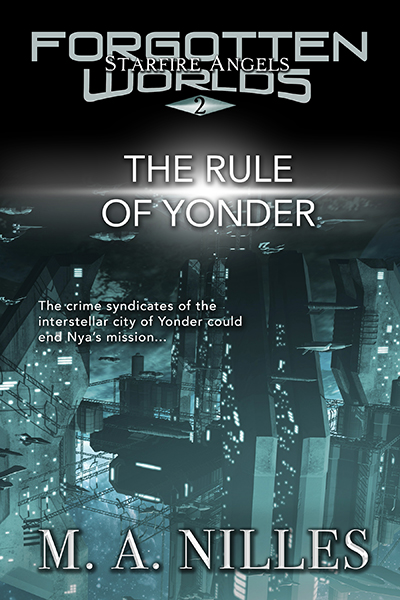 The Rule of Yonder

Book 2
Despite their narrow escape from the Issan, Zaer’s starship, the Da’Nelgur, was severely damaged. Vel and Shen have tried to fix the hyperdrive, and Nya is sound asleep. Their only chance to repair the ship to continue their journey to Ethal is a crime-syndicate-run remote city in interstellar space.

Yonder Station is not a place where anyone with sense wants to stay long, but it has its advantages. A home to salvagers, dealers, hustlers, and assassins, it is also a valuable trading post for the fringe of the galaxy, especially for information. The latest news is the Da’Nelgur’s involvement with the Issan and the mysterious portals.

When Zaer is taken by one of the crimelords seeking what she knows about the portals, it is up to Nik and Nya to rescue her. But that same crimelord wants them too. To rescue Zaer, they will need to avoid being captured while tracking where she might have been taken. What they discover could get them killed, or it could gain them powerful new allies. What could go wrong?